Upcoming Film Screening of “A Decent Home” by Sara Terry 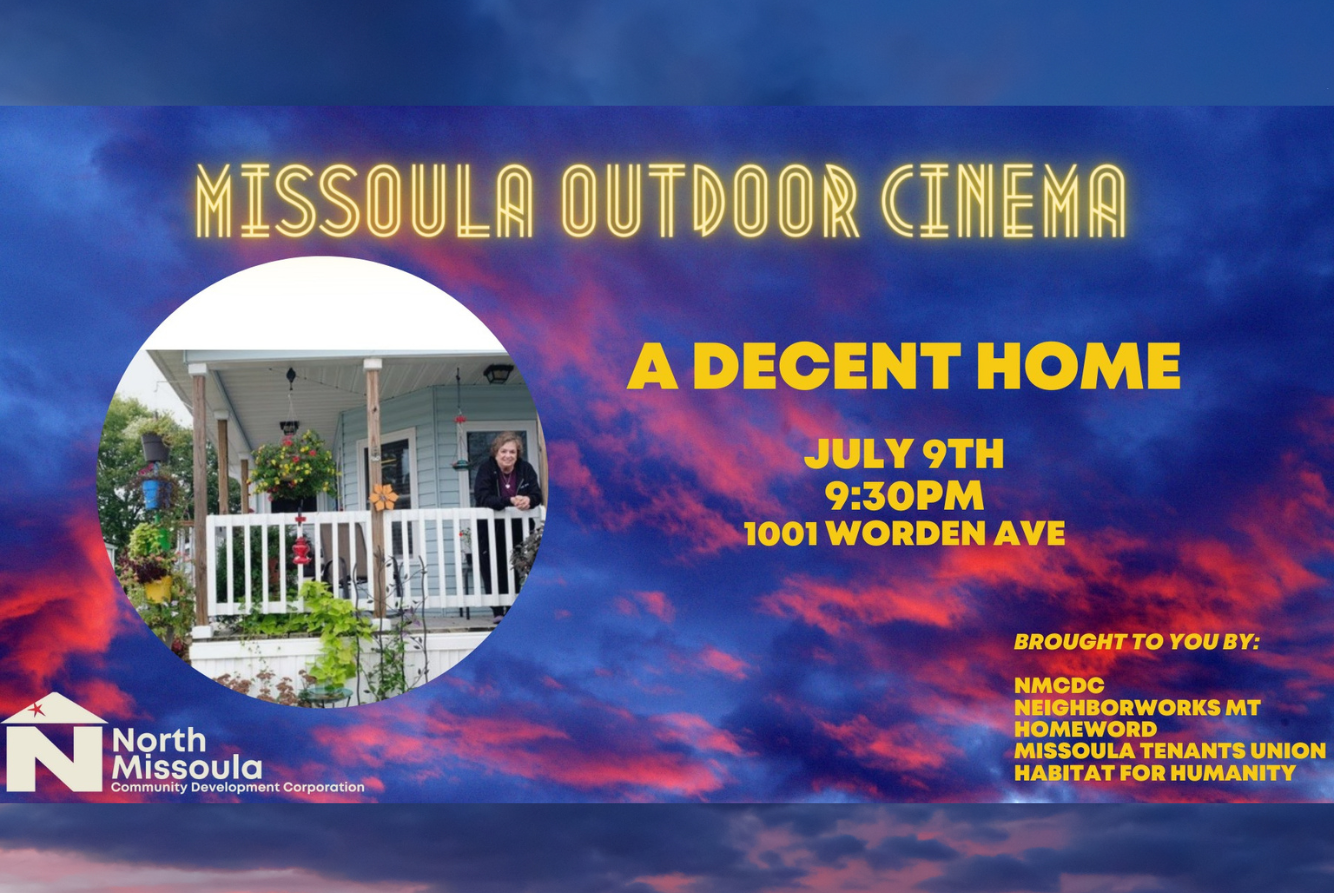 Join us for a special screening of A DECENT HOME by Sara Terry on Saturday, July 9th at 9:30PM as North Missoula Community Development Corporation presents their 19th season of Missoula Outdoor Cinema!. This event is hosted in collaboration with Homeword, the Missoula Tenants Union, Habitat for Humanity of Missoula, and NeighborWorks Montana.
Come early to hear from about each organization and how they contribute to a possible solution to the housing crisis in Missoula.

Learn about the film here: www.adecenthomefilm.com/

This event runs on neighborhood volunteer power — grab a friend and sign up here to volunteer: https://volunteersignup.org/4PLLE

The North Missoula Community Development Corporation is a community advocacy organization and developer of permanently affordable housing using the Community Land Trust model. Our staff and board are Missoulians dedicated to working alongside neighbors to build communities that are healthy, vibrant, and engaged. We love our neighborhoods!
A program of the North-Missoula Community Development Corporation for the last 19 years (minus taking a year off in 2020), Missoula Outdoor Cinema brings free cinema to the
play-field behind the Northside’s old Whittier School for our community. Throughout the years, neighbors of all ages have joined us, and we’re excited to celebrate another year of fan-favorite movies starting at sunset for eight consecutive Saturdays this summer beginning July 9th.

Sara Terry is a mid-career director whose work explores how we define our humanity and the role of community in helping us understand what our humanity looks like. Her first documentary, Fambul Tok (2011), about an unprecedented grass roots forgiveness program in Sierra Leone, was supported by Sundance and Chicken and Egg and won several awards at more than hundred festivals world-wide. It was included on Paste magazine’s list of 100 best documentaries of all time. FOLK, Terry’s second documentary, followed three singer-songwriters through the sub-culture of American folk music; the film enjoyed a successful niche film and music festival run, including DOC NYC, Nashville Film Festival and Bonnaroo Music Festival.

Terry is a member of the International Cinematographers Guild, and has worked as a story consultant/consulting producer/grant writer on more than a dozen documentaries, including Hao Wu’s People’s Republic of Desire (2018), Kimberly Reed’s Dark Money (2018), Michael Collins’ and Marty Syjuco’s Almost Sunrise (2017), Nanfu Wang’s One Child Nation (2019), Johanna Demetrakas’ FEMINISTS: What Were They Thinking (2018), Lisa Hepner’s The Human Trial (in post) and Sandra Salas’s Into the Storm (in post). Terry is a Sundance Documentary Fellow, a Film Independent Fellow, a Guggenheim Fellow in Photography, a Logan Non-Fiction Fellow and a member of VII photo agency.