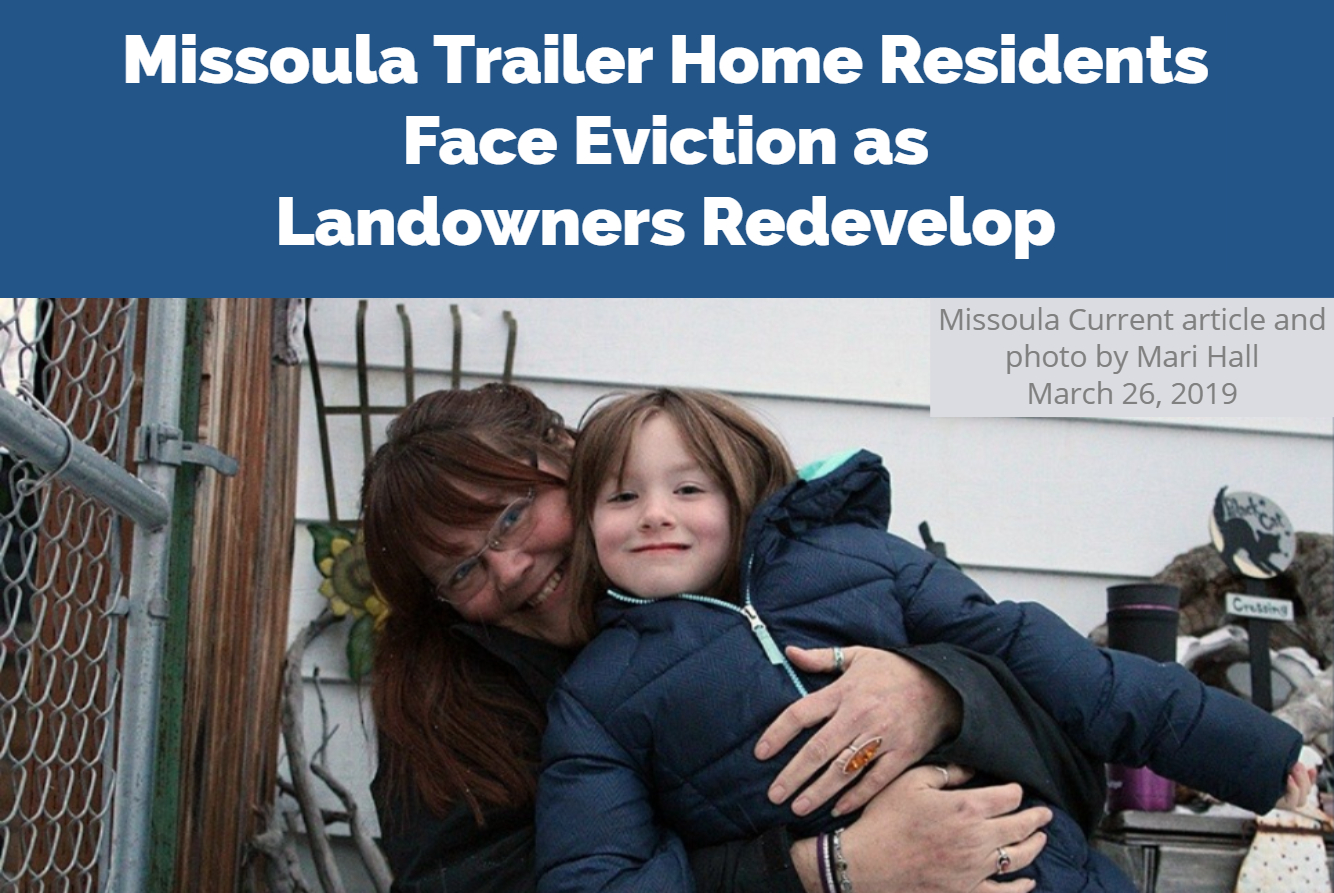 BY MARI HALL – Calleen Collver-Holm has a sign on the wall of her mobile home on Strand Avenue that reads, “Someone Else Is Happy With Less Than What You Have.”

She tries to live by the motto, but her future is uncertain. So uncertain, she doesn’t know if she’ll have anything left later this year.

In December, Collver-Holm received a rezoning notice from the city of Missoula for the land beneath her mobile home. In January, the Missoula Consolidated Planning Board approved denser zoning for the 12,686-square-foot lot on Strand Avenue and Grant Street, followed by the City Council in February.

The rezoning notice listed criteria for the planning board to consider, including whether the change was in accordance with the city’s growth policy and promoted urban development. But the human impact wasn’t considered, Collver-Holm said.

Three of the four mobile homes are still in use on the property. Collver-Holm has lived on the lot for almost a decade. Now, she and her neighbors face eviction to make way for a new multi-family housing development she cannot afford.

Her home is evident of long-term living and a safe space for Collver-Holm and her 5-year-old daughter. White string lights line the tops of the walls adorned with her daughters’ drawings. Colorful prayer flags hang on the fence outside.

Her dogs and cat, or what Colver-Holm calls her “critters,” are part of the family. Living in a space that is stable for mother and daughter and allows pets is important to her.

“This is the longest I’ve ever lived in one place in my entire life, ever, including my childhood,” she said.

Collver-Holm lives on a fixed income, receiving disability checks of about $1,200 per month, with some help from her ex-husband.

Before she was on disability, she worked as a certified occupancy specialist for a property manager in Portland, with parents who specialized in transitional housing. She’s had experience helping those who’ve been displaced and wants to be a voice for them.

“Sometimes, all of these broken-spirited people need is a second chance to be treated with dignity and respect,” Collver-Holm said.

As the owner of her 1972 mobile home, she would be required to purchase a new foundation, axels, tires and skirting in order to be moved safely on the road. Relocating her trailer within the city limits would be $1,800, she said.

“The one income you have absolutely, unconditionally has to go to rent and utilities. Nothing else matters and there is no such thing as extras,” she said.

The landowners, Jeremy and Betsy Milyard, declined to comment on the rezoning and redevelopment. According to a letter written by the Milyards to accompany the rezoning application, they plan to build multi-family housing on the land, at a higher density than that allowed by the previous zoning.

“The number of units and design are yet to be determined as obtaining approval for the zoning change is the first step in our planning process,” the application read. “We a(r)e currently approved for just under 6 units and would like to be able to obtain a density of 8-12 depending on what comes out of our design process.”

The new zoning supports the “focus inward” approach of the city’s growth policy to encourage development in the urban core where infrastructure already exists. With enough space for higher density and the proximity to services, the land is ideal for development, according to the executive summary of the rezoning request. The notice did not specify an eviction date.

Collver-Holm said she is still on good terms with the landowners and understands that a multi-family development would make more economic sense. They offered her an apartment once the development is built, but Collver-Holm said apartment living isn’t realistic for her due to space and cost.
**
This isn’t the first-time residents of a Missoula mobile home park have been displaced.
In 2014, Hansen’s Trailer Park on South Third Street West evicted its residents to make way for Missoula’s growth, and residents of Skyview Trailer Park were forced out in 2017. The Skyview property now sits vacant.

Kaia Peterson, assistant director for NeighborWorks Montana, said the demand for land in Missoula is high, with many landowners looking to develop or redevelop their property.

“I think really what we’re seeing is, as the value of land continues to rise in Missoula, the return that property owners can get on lot rents is starting to be less than what they can get for redeveloping properties to other purposes, whether commercial or multi-family or other forms of residential,” Peterson said. “Because Missoula is a geographically bound area, there’s a high demand for land.”
NeighborWorks Montana helps to preserve affordable housing across the state, including manufactured home parks and lots, using a variety of strategies. Sellers of these parks can get a state capital gains tax deduction if they sell to a nonprofit, a housing authority or a resident corporation.

The North Missoula Community Development Corporation helped residents of Skyview Trailer Park find new homes, or basic necessities, through NeighborWorks Montana, the Missoula Housing Authority, the Missoula Human Resource Council and the Missoula Food Bank. The ultimate goal, however, is to preserve this type of housing.

“I think for us, as an organization that tries to preserve this type of housing and maintain affordable housing, we’re always looking for opportunities where we still have a strong enough economic argument to be made to preserve the property as is,” she said.

Collver-Holm recently met with City Councilwoman Julie Merritt to talk about ways to help displaced residents in Missoula. Merritt recalls that when residents from Skyview Trailer Park were forced out, some became homeless while others, who were able to secure a small loan, put their trailer on a fifth wheel.

Their standards of living were reduced drastically.

“I’m hopeful that with the housing policy that they’re working on right now, that one of the aspects will be some support when people are displaced because of land use decisions,” Merritt said.
The city’s housing policy, aimed to be released in April, may have some strategies that will address manufactured home parks specifically. Implementing a housing trust fund that can provide lower-cost financing to make park deals with organizations or residents more viable is one opportunity.

The Montana Interfaith Collaborative is working with other organizations to draft solutions to the affordable housing crisis that will be introduced to the Missoula City Council, such as streamlining application processes and background checks and providing incentives to landlords who are willing to rent to tenants with poor credit or a criminal background.

Right now, there are about 110 mobile home parks with a total of 2,800 homes in Missoula, and many residents own their home outright, which makes living more affordable.

“Typically, when you’re looking at manufactured home parks, the lot rent is going to be half of what a comparable rental unit would be in any given market. In Missoula, we’re seeing lot rents of about $350 a month. Most of the people in these parks own their homes outright, so they don’t have debt,” Peterson said. “So, when these people are displaced, you can guess that the price of their housing is going to double if they don’t have some kind of subsidy.”

Collver-Holm has experienced homelessness before, having lived in a van in Missoula in 2008 before her daughter was born. Now she may be on the brink of losing her home again. The big city mentality is what made her move from Oregon to Montana, however, Missoula’s push for development concerns her.

Something needs to be done to help people like her, she said. Creating a nature-based trauma recovery and support center for survivors of rape, incest and violent crimes has been a dream of her for more than 20 years.

“When we start losing hope, we’re in trouble. A lot of us are so beat down already, just trying to survive and just fighting to exist. We’re not really living, we’re just existing,” Collver-Holm said.
While she continues to look for new housing for her family, Collver-Holm said she’ll continue to be a voice for those who find themselves in a similar situation.

“Many of the people who make the community magical are struggling from paycheck to paycheck. So when you force them out of the area, you’re also taking away the magic that came as part of that area and the reasons that it became such a desirable place to live,” Collver-Holm said. “It’s not because it had these fancy new buildings and these upper-class shops. It’s because people gave a damn about each other. At one point I had someone offer me his socks, because I didn’t have any when I was homeless. It’s a different world.”

Photo: Calleen Collver-Holm and her daughter Sofia Iliff stand in front of their home on Strand Avenue. Collver-Holm, along with her neighbors, received a notice for rezoning from the city of Missoula in December 2018. (Mari Hall/Missoula Current)